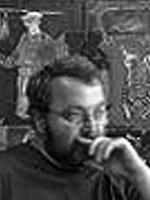 Since 1978 he participated in national and international exhibitions in Yerevan, Japan, Germany, including solo exhibitions in London and Los Angeles. His paintings are displayed in the Modern Art Museum of Armenia and in private collections around the world.

In the 1980's he emerged as one of the leading young artists who began to challenge Soviet norms. His work carried the imprint of the Italian early Renaissance, Russian iconography, the Russian new avant-garde, Armenian miniature painting and current developments in post-modern art in Armenia. During the post Soviet period, Sarkis emerged as one of the most important artists working in Armenia.

Reviews:
Sarkis is the type of people who constantly lack space, it seems as though, given the opportunity, he may well fill up the with his paintings the biggest exhibition hall in the world. A gift, even a talent usually do not make a man. Sarkis amazes with his formitable stamina, his thirst for life, for everything that makes an artist and, what is most important, with an endless trust in himself, his calling.
Most of the works of Sarkis are somewhat like polyptychs combining different motifs. The thoroughly elaborated construction of a nascent painting becomes a reliable frame that nevertheless does not constrain its own subsequent development.
The exuberant activity of Sarkis Hamalbashian leaves the impression of a volcanic eruption, a sort of perpetuum mobile, he values and cherishes his every day and every hour. And although. His works never get stuck in the studio for long, a visitor may feel overwhelmed with the ever increasing quantity of canvases, rich in intensive, yelling, challenging music of painting.

***
The paintings of Sarkis linger in memory. The dreamy feeling persists. This dream is about life where the past and the present are woven whimsically together: that which is history and that which shall forever remain a distant dream. This is the intrinsic world of the painter that is not confined within a single nationality or single tradition, it is open to the winds of change and thus is in the unison with all the people that have an intellectually high-strung soul like Sarkis. What is it that assembles the divergent images in the paintings? The unique consonance in which he remains to be an Armenian. Let us fine-tune our ears and list: anxiety, fear of ugliness and cruelty and also, perhaps, shaky hope. Embodied in a white angel.

Kim Bakshi, The Dreams and Consonances of Sarkis Hamalbashian

***
Intuition, life and art
When Sarkis became aware that painting was his destiny and vocation he, like all beginners, felt the impact of those important influences. Bosch and Mantegna were his idols. Then, Matisse became his God… Later on Sarkis found his own motifs, his own view of humanity, life and nature. Hamlbashian’s paintings breathe quietly and evenly. One cannot remain indifferent toward them because they urge the viewer to stop for a while and breathe a long. One can imagine him as a little boy, standing on a threshold of the family home, watching the women greeting each other and exchanging the latest gossip. After the earthquake, after the extensive destruction in the native Gumri, Hamalbashina’s work underwent dramatic changes, but still the earthquake scenes are not directly found in his works. The terror of nature is recalled in the artist’s works indirectly. His move to Yerevan coincides with the transformation of the artist’s mentality and outlook, and is reflected in the mode and colors of his work.