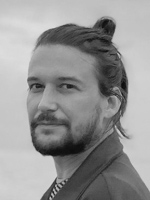 
Halil Sercan Tunalı was born in Edirne, Turkey, in 1983. Due to his family’s business conditions, he travelled around Turkey, and had the chance to live in various cities. His studies began as a gifted student when he was accepted to an high school of fine arts in Antalya, in 1997. By the time he was majoring on painting, he attended a drama course in a state institution to widen his art vision. In 2001, he was admitted and ranked third to Anadolu University, Faculty of Fine Arts, to study Animation. During his education, he participated in many official exhibitions, made miscellaneous collaborations, and also worked in a student magazine as an illustrator and writer.

He was appreciated by a well-reputed literature magazine called “Varlık”. He made an animation film for his senior project and it was appreciated and shown by many film festivals both domestic and international. When he graduated from college, he went to Sydney (Australia) both to study, and to participate as a supporter in some projects about character design and animation. He then came back to Turkey to kick his career start. While he was working for many companies, he won a bursary to study Film Making and Cinematography at New York Film Academy in US. Then he moved to New York in 2012. Then he came back to Turkey to keep working in his career. In 2015 he went to study Character Animation at Gobelins, L'école De L'image in Paris, France. After that he moved back to İstanbul and he has been living&working in İstanbul.


Artist Statement:
“This life is a hospital, where every patient clamors to change beds. Some wish to suffer in front of the fireplace, some believe they will get better by the window. I feel I will be happy wherever I am not, and my never-ending quarrel with my soul is this desire to move,” Charles Baudelaire had said, referring to his insatiable soul. The real world is now behind filters which we don’t even realize. Evet serious matters like climate change and global warming are dolled up through filters to look prettier and more impressive. Scenes of war, famine, extinction, even litter become works of art in black-and-white photography. Everything hinges on impressing the viewer. Halil Sercan Tunalı’s lighthearted illustrative language forms the backbone of a more somber look into serious matters: overconsumption in modern society, unhealthy expectations of “beauty”, and the banality of the “real” world whose “reality” is long gone. The works reveal our true nature fueled by ego, greed and pride as we let loose our inner monsters on nature and humanity to pillage and destroy.

The artist, whom we frequently encounter with the effects of minimalism and surrealism in his compositions, tries to be nourished by the effects of expressionism, optic and abstract art. Influenced by artists such as Picasso, Miro and Escher, Halil Sercan Tunalı strives to strengthen the bonds he wants to establish with the audience by creating an alphabet with the symbols he uses in his paintings. Some of these symbols are images which point to many different concepts such as eye figures, fish, doors, windows, tree branches. While trying to diversify the materials he uses as much as possible, he pursues different results at every step with the opportunities provided by new techniques. He uses materials such as graphic pens, ink pens, watercolor and acrylic on paper, glass and wood surfaces. In addition, he gives life to the paintings he has made with an animation that he studied. Experienced in fields such as video art, animation and interactive animation, the artist focuses on how to make the most accurate presentation of a thought. Besides being a finalist in many national and international festivals with his short animation projects, he was also awarded with many of them.