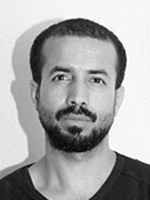 Mehmet Resul Kaçar was born in Dicle district of Diyarbakir in 1984. He completed his primary, secondary and high school education in Ergani district. In 2003, he won the Anadolu University Faculty of Fine Arts and Education, Department of Art Education with a special aptitude test. He graduated from the department of painting in 2007. He started to work under the Ministry of National Education in 2008. In 2009, he was interested in short films and made experimental shots. In 2018, he started his master's degree at Mimar Sinan Fine Arts University, Department of Basic Art and Design. The artist lives and works in Istanbul.

Having opened his first solo exhibition in 2006 at Eskişehir Anadolu University Faculty of Education in 2006, Mehmet Resul Kaçar held his second solo exhibition "Hebun (Being)" in Diyarbakır Metropolitan Municipality in 2015. In addition, he participated in various group exhibitions in Turkey between 2006-2019. In addition, his works were deemed worthy to be exhibited in painting competitions between 2005-2019 and he won various awards.

Newly represented young artist whom will be remembered by the audience from the 2019 edition of Mamut Art Project, Mehmet Resul Kaçar, relays the negative change in the world from the past until today from the perspective of nature and animals. The most striking point of his is the fluidity of the roles and figures on a standard theme (a field of wheat) in the background. In a rugged landscape, in this violent-barren sphere, his paintings depicting human and animal conflict reminds the audience of figures in a struggle with rulership and sometimes in a position of rulership themselves.

This exhibition, named after a region of the artist’s hometown Diyarbakir, features a video work along with his new paintings. In Field of Roses exhibition, Kaçar depicts the region in which he was born and raised. On one hand he conveys landscapes with a unique plastic language, on the other hand examines the connection between animal abuse-human violence.

Kaçar’s landscape paintings go beyond traditional representation of nature. His use of spike-yellow as background shows the key points of the artist’s originality. First of all, it is easily noticed that the paintings are not the depiction of natural scenery “as such”. The sense of depth in these imaginary landscapes is given by different tone applications of the same color and / or matte-gloss texture contrasts. Thus, stands out the color sensation rather than rational linearity. In modern arts where the color becomes the subject of painting, Van Gogh is undoubtedly one of the leading artists who use yellow most effectively. In a letter to Emile Bernard, he defines yellow as “the embodiment of the utmost clarity of love”. Similarly, Kaçar’s use of yellow has the potential to open up to sublime and eternity. Its originality lies in the fact that the yellow color assumes a geographical character as it may signify a longing for homeland.

Endless fields, plains, steppes and animals grazing in the mountains come to mean peace and tranquility for those who live in the chaos of Istanbul. However, the geography and climate of South East Anatolia is as harsh and violent as its history. In this spiral of violence, the main issue of Kaçar is to depict the animal abuse and other forms of human cruelty. His childhood memories, the testimonies of his family and his circle about human-animal relations become a universal problem and make it possible to question the notion of violence in human nature. Thus, Kaçar criticizes the exclusionary and destructive consciousness behind any human activity that objectifies nature and animals, such as cock and dog fights, hunting as a leisure, Safari tours etc. Meanwhile he becomes the subject and object of his paintings. Sometimes he appears as an observer with his shirt, tie, and red jacket examining animals from outside or as mediator sitting at the table with them; sometimes as a character being chased by them.

The fact that the explicit disclosure of violence in Kaçar’s paintings is associated with both geography and humanity leads us to philosophical, historical and political inquiries. When it comes to the severe conflict between humans, nature and animals, he invites us to rethink about our consciousness.

On the Paintings of Mehmet Resul Kaçar

Neither the word "civilization" nor the word "culture" that establishes and sustains the former are words which manifest themselves clearly. Although these are generally perceived as "good things" about "humanity" and approved as admirable representations of history, it is necessary to take a closer look at the processes accumulated in those words.

We constantly pay attention to the cultural indicators which create civilizations. What we look for in ancient cities are temples, theaters, marble streets and squares; and in modern cities,  historical buildings: Cathedrals, large mosques or palaces… These never go beyond our scope of interest. On the other hand, texts that we read with pleasure generally praise civilization and culture, while bringing forward signs that are cliché. It is actually our imagination that fills in and attributes meaning to these two words, namely civilization and culture. These signs do not clarify the "existing situations" as they happened in history, on the contrary, they glorify "what should be". Thus, it idealizes the "history of humankind" and turns it into a nominality.

However, it is not that simple and the indicators do not move towards the "ideal" in a straight line. Many philosophers, historians, artists, etc. had torn down those indicators and poured out their contents. As an example, perhaps the most comprehensive explanation of this comes from Theodor Adorno; According to him, "the history of human" is the history of blood and cruelty. He writes: “The world’s essence is mischief; its appearance however, the lie, by virtue of which it continues to exist, is the placeholder of truth."

Walter Benjamin also shares the same point of view with Adorno. However, as his writings progress through cultural assets and cultural texts, he begins to offer more concrete data about this history: “Whoever has emerged victorious participates to this day in the triumphal procession in which the present rulers step over those who are lying prostrate. According to traditional practice, the spoils are carried along in the procession. They are called cultural treasures(…)"  Therefore, according to Benjamin, there is not a single document in the field of culture, which is not at the same time a document of barbarism and which does not continue to have an effect from generation to generation.

The sentences of Adorno and Benjamin point to an important conclusion: Tradition is not so innocent… The character of "spontaneity" embedded in the sociality and the cultural indicators which flesh out that character being kneaded with violence ... But on the other hand, all those glorified indicators and texts being used as a justification and idealization of this history...

Now, starting from this point, we will observe the scenes Mehmet Resul Kaçar ascribed to his paintings and we will see what happens in those scenes as a reflection of a culture that bears the mark of violence. In a text created for these paintings, the artist writes: “Throughout history, arenas and fields of contest have witnessed scenes of blood bath involving slaves, gladiators, and wild animals. But why? What is the function of violence as a game to be watched, or a spectacle?/ ... People today display the same brutality towards animals for pleasure. Bets are being made under the pretense of having a rooster association by organizing cockfights, and dogs are forced at each other’s throats by saying it is a festival. A video of a gazelle released in the desert being chased by hounds and turning into their toys. In Artvin, injuring a bear cub and siccing the dogs on it, all the while watching with laughter. Bizarre show-offs under the pretense of hunting boars, the mountain goat hunt in Tunceli, bird hunts, British fox hunts… While humans engage in violence, on the other hand they pit animal against animal. There is a strong connection between the actors in the historical background of the past and the current actors of the age we live in.”

It is understood that the artist takes the legitimacy provided by the traditions in terms of violence and makes a reference to Benjamin with this text: Carrying barbarism over to the present day via those traditions and through texts that sanctify those traditions; moreover, normalization of all these as cultural heritage… Such an approach has two intertwined aspects: First, the violent side of the primitive ego of humankind… And second, the modernized human continuing this trend by disguising it under the glamorous packaging of tradition… We are talking about a process beginning from the ancient Greek culture in which killing was considered immoral, but the fact that one wrestler causing the death of another during wrestling was not considered so, and afterwards going through gladiator training in Roman gymnasia, and finally to the real war scenes on television screens, to be watched and enjoyed just like a movie. All that is happening is that a "Lucifer", which has always been intrinsic to humankind, reveals himself from time to time given the opportunity.

However, Mehmet Resul Kaçar's paintings further expand the relationship between tradition and violence and transmit it from an interpersonal dimension to violence between humans and animals. This situation brings us to "Lucifer", who shows his face in the human-nature relationship. So this time when we turn our gaze back, we will first encounter arenas… Degradation and widening of Hellenistic theaters during the Roman period and their reorganization for animal fights… These are the areas where the great masses showed even greater interest and where those masses were appeased and tamed by the ruling class… Then, in the struggle of modern human against nature, comes the pleasure of triumph in overcoming the nature in the name of "rationality"… Although the Lévinasian ideas of the first half of the 20th century highlighted the concept of "nature" in the context of the relations between "hıman" and "others" and advocated the reconciliation of "everything" natural and "human", these remained only at the level of "romantic attitudes". Bruno Latour implores as such: “…where are the Lévinases of animals? Yet the human, as we now understand, cannot be grasped and saved unless that other part of itself, the share of things, is restored to it.”

All of these are undoubtedly cases that decipher the "thing" called "human", while on the other hand every event related to violence seems to make people nervous. However, humans carry that violence in themselves and they do not refrain from putting it into practice, while seeking ways to hide and deny it. Just as Benjamin said: Violence is brought to us by traditions and cultural heritage and cultural texts that glorify those traditions… Modernity had never attempted to destroy feudal traditions as many thought, rather it was more than satisfied with changing their forms and making them useful to itself, that was all.

As we said in the lines above: “However, it is not that simple and the indicators do not move towards the "ideal" in a straight line. Many philosophers, historians, artists, etc. had torn down those indicators and poured out their contents.” Mehmet Resul Kaçar is one of those artists and in each scene he creates, he taunts the humankind with both "human violence" and the representations of "civilization” and “culture" that skillfully conceal that violence.