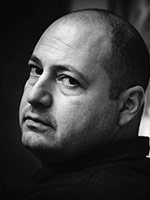 Roman Babakhanian was born in Yerevan in 1973 and studied at Yerevan State Academy of Fine Arts. Since 2003 he is a member of Artists’ Union of Armenia. He lives and works in Yerevan, Armenia.


Artist Statement:
“My sincere love for art has helped me to accept and take interest in almost all artistic currents. I have been impressed by some of them while being student. I never avoided impacts. I have easily accepted and easily got rid of them. But during all that period I have had one special interest – the impact the phenomena surrounding us have on the objects, and the traces they leave on their surface. In the course of time this interest grew into love and I felt the necessity to create a small world of mine where light, color and space are present, where the objects are related to each other in a certain way, thus creating a special mood and atmosphere. This world is governed by all the rules that derive from the existence of time and are revealed in the processes of birth and erosion, leaving an impact on the objects. All these developed into the genre of still-life. An environment of silence and intimacy that allows me to relate immediately to these phenomena and study them as deeply as possible. As a result, I chose realistic painting to be my means of expression, always trying to stay true to nature. Every single artwork of mine is an attempt to study nature more thoroughly. My goal is to stop the moment, to make it permanent, detach it from the influence of time and unite it to eternity, as far as I can manage it.” - Roman Babakhanian


Reviews:
Roman Babakhanian’s paintings are photorealistic. In his artworks the objects are presented from such an angle, that they seen monumental to the watcher. This, in its turn, makes interesting the visual perception of the images. Roman places the objects and fruit in the centre of the composition and depicts them flawlessly, choosing the colors in a way that endows the painted objects with special mystery, making them the main idea of the artwork. Whether a stone, a plum or another thing is painted, in Roman’s works it always appears to be something more than we are used to conceiving in our daily life. The colors and the transitions of light sacralize even more the images.

Trying to describe Roman’s paintings I feel them similar to a theatrical performance, when at the end of the play each character comes forward and takes a bow on the stage under a special lighting. What remains to us is to wait for the creation of a new character. I wonder what object will attract the attention of the artist next time.

***
Roman Babakhanian’s still-lifes transcend realism. He depicts everyday objects with an emotion and sensuality that makes them seem animated on the canvas, and his multi-dimensional compositions reveal new secrets at each viewing. A realistic expression of materials and plasticity are important. A great love for the paint is exhibited in the beautiful skin of the paintings, to which he pays a lot of attention. In Roman Babakhanian’s artworks the subject leaves its material conditions and comes to life through light. He explores pure painterly technique, its textures and esthetic pleasures, without giving the work a secondary, time-related meaning.

The mixture tones of ochre and blue-green are the main colors of his paintings. The painter’s still-lifes are full of color, light, plus fresh and glowing fruits and vegetables, the tactile effects of utensil and the possibilities between variations of deep, mysterious backgrounds (“Still-life with Eggs”, “White Cup and Walnut”). By modeling the rough-skinned red plums with hints of yellow in his artwork “Plums”, he suggests the fruit’s protuberance and weight. The arrangement of the green leaves creates a rhythm of light and shadow.

Roman Babakhanian’s artworks are built on centuries old foundations, yet very much conveys a sense of this century with a contemporary edge of freshness and clarity.