Alle Meine Krankheiten (All of My Diseases) / Bütün Hastalıklarım, 2020 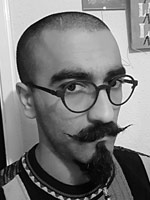 Narek Arzumanyan was born in Yerevan in 1988. He lives and works between Nuremberg (Germany) and Yerevan. From 2004 to 2008 he studied at the P. Terlemezyan Yerevan State College of Fine Arts, and in 2008-2011 in the Yerevan Academy of Fine Arts. In 2008 and 2009 he was awarded the prize by the President of Armenia Serž Sargsyan. In 2010 he was awarded the first prize in the competition Martiros Saryan and he participated in several exhibitions in Yerevan. Narek Arzumanyan's artworks can be found in private collections and public museums throughout the world.


Artist Statement:
“Like many other artists, I have painted since childhood. I consider my years of studying at the art college and academy as passive painting state and therefore an insincere period of my life. That being said, they did have a profound impact on me and provided me with a strong foundation.

My paintings have almost always been misunderstood and I am very happy about that, because I have not tried to be perceived, let alone be understood by anyone. Even now, looking at my own works, I often cannot read what I have done. In a similar way, I find my inner-world, which scares me, also incomprehensible. This is why I’ve always loved works of artists merely on the basis of them being incomprehensible to me.

I often go to the canvas with topics that move me, but after I finish painting, I forget what my purpose was. Death has always been one of my central themes, but it is also the cause for my inner-suffering. Dark sadism is as horrifying as it is beautiful! Sometimes I think if I wasn’t drawing, I would have become a social outcast or just another idiot who would hurt himself or someone else. By painting, I try to help myself heal. I have never painted for someone, or a wall, or an idea. I do it solely to grind away the pain.

My school years brought me the magic of being able to speak with paintings. Since childhood, I loved playing with symbols, doing it with complete irresponsibility and escaping punishment. Although the symbols were taboo, my purpose never was to provoke anyone. This was just the touch of my style on man-made symbols that usually arouse fear/panic in people. In my paintings, these symbols find a very innocent place where they can rest from being considered as evil. For example, the swastika which is considered a symbol of Nazism is relieved from its burden of being evil and just becomes a line or another brick in a wall.

My first step towards self-realization came when I created a series called “Dead Thieves and Children.” Since then I had to get used to the idea that there is evil inside of me which could only come out in the form of art. My approach to my art was to make it as ephemeral as a child-hood crush or a soap opera so as not to overburden walls everything already cluttered with art. Basically everything revolves around me in my works. By this, I don’t mean myself, but more importantly my experience, my lies, and my perception which are crucial in understanding everything else. I understand best the language of art and it is for this reason I have difficulty understanding people. I often find my answers in art such as films, music or paintings. I can’t explain it, but I’ve always felt it, and I hope this feeling always guides me in the right direction. I’ve always been afraid to paint and so many times I find myself painting over existing posters. When I was little, I used to draw in books, between letters, and over my paintings several times. This helped me keep myself close to what I was familiar with.

I was greatly influenced by Parajanov, Lars von Trier, Jim Jarmusch and Francis Bacon because of their obscure and savage language. Those who know me are aware that I am a huge liar in my art. I love to play tricks in art, a field that I lie in so honestly that my own naivety leads me to believe my own lies. If you see any political, religious, or racial elements in my works, then either it was there or it was within you, but I didn’t intend any of it at all! I am like a bee sitting on a flower or shit, and I give you honey to eat or not to eat. I don’t make honey for you to eat, rather I just do my job, my function. Nevertheless, remember all the things I have been on to produce that tasty honey.”