From Prayers to Broken Stone, 2020 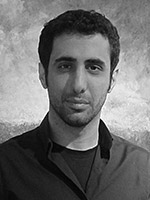 Biography:
Born in 1986, Istanbul, Turkey
2003-2007 Maryland Institute of Art College, Illustration (David Jacob and C.V. Starr scholarships)
2007-2011 Worked as an animatör, designer and illustrator in USA and Bosnia Herzegovina
He currently lives and works in Istanbul.


Berkay Bugdan was born in 1986, Istanbul. Studied illustration at Maryland Institute College of Art with full scholarship. Worked in/around animation, film and design for about a decade before turning towards fine art. While focusing primarily on painting, took part in a wide variety of projects spanning yacht design to video game development. Currently set up in Istanbul.

Drawing on themes of transience, chaos and the human footprint, Berkay Bugdan's works incorporate various industrial materials and data analysis techniques with classical painting and sculpture. Bugdan's works are characterized by his use of experimental surfaces and image composing methods that each introduce an aspect of relinquishing control for the artist. Weather by chaotic output from software, uncooperative rectified materials or simple corrosion, the production methods often render the final piece just as much as the artist does. This conflict or balance of the artists narrative perspective and unruly techniques define the artists unique style.


Review:
The artist uses “rust" as a part of his technique and material, which is a material that symbolizes a sense of transformation as well as decay or destruction. One can trace the analogy in the artist’s steel paintings, as well as his other works where artist pauses the destruction or the construction in each piece at different rates that creates a sense of motion throughout the exhibition. For example the sculptures each have their own devolution processes, depicting various states of existence, and the reclamation of order is dominated by the cycle of chaos and its temporality.

The works linger in the line of being, yet-to-be, or used to be – all these perceptions remain slightly overlapping each other. Chaos, which has been a primary subject for the artist, taking on a more mature perspective, focuses on the rebirthing part of chaos. Time becomes crucial and the process stands out. We experience a state of existence, rather than viewing.

In his new works, existential data is once again compiled and synthesized meticulously; and references to all perceptions such as touching or hearing are apparent. For instance, the first interactive work produced by the artist is in the form of an instrument-sculpture. It emphasizes on one of the most prominent factors in his works, which is transience. Actually, this interactive sculpture can be interpreted as a plant or a tree, like the sounds trees make, the sounds that appear from their sole existence and disperse through interaction with air.  Similar to that, the lifespan of the sound waves dispersed from the sculpture that compiles feedback from the participants and the venue itself are observably short, underlining the temporality aspect further. This perspective also surfaces the temporary sense of aesthetics. The sound waves represent the temporality of everything created by the humankind in relation to the cosmic timeline, in which, all vanishes. This emphasis on temporality enables a similar feeling to the awe and the peculiar admiration one feels when one encounters a forest fire.  With the same parallel feeling, almost an admiration of entropy, we are reminded of reclamation through deconstruction and recreation, where temporariness is what life consists of, the very state of transience itself.

Buğdan explains the state of conditional existence in his works by saying; “Temporariness of everything makes it more prominent”, “if everything is temporary, there is only one thing that is permanent: ‘the moment’ and what we create from it.” We can find themes of destruction and transformation in the way he transforms the materials in his works, and even a kind of perceptual transition in ourselves, as the spectators. The reason why the works evoke such a feeling of deep and natural admiration is maybe because they reveal the delicate negotiations of ‘existence’ rather than strengthening sole aesthetic creation. The exhibition is more of an existential consensus as it erases and rewrites the traces of being, witnessing the balance between the dark (non-living) and the light (living), what is and what is not…