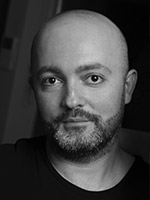 Biography:
Born in 1983, Yerevan, Armenia
1998-2004 Studied in Yerevan State Academy of Fine Arts
Since 2008 Member of the “Union of Artists of the Republic of Armenia”
Since 2010 he lives and works in Armenia and USA

Rafael Megall was born on 2 January 1983 in Yerevan. He started to paint when he was 9 years old. Between 1998 and 2004, he studied in Yerevan State Academy of Fine Arts. Since 2008 he is member of the Union of Artists of the Republic of Armenia. Since 2010 he lives and works in Armenia and USA. Starting from 1995, he has had numerous individual expositions, as well as has participated in a number of international exhibitions.

“The artist and his Mother”, Installation at The National Gallery of Armenia, 2017

When you set out to describe the most painful moments experienced by your people through the language of art, the figures and the symbols you make reference to must be the highly expressive and significant. There are brilliant works in this sense. In literature there is “The Unstoppable Bell Tower” by Paruir Sevak, in architecture there is “The Memorial” by Dzidzernagapert, in music there is “Komitas”, in painting there is “The Artist and His Mother” by Arshile Gorky.
I drew inspiration from the painting by Gorky and its title for the installation made for my exhibition at the National Gallery of Armenia. In my installation the artist evoked in the title is not only the young Gorky, but the many young people (and old) who lived as refugees. The mother, with signs of pain etched on her face, becomes the mother of every Armenian. Here Gorky’s painting has been reduced to shreds by “Two-Headed Panthers”. The installation represents a sacrilege: man is the perfect creature created by God, hence destroying a painting that depicts him is a sacrilege that surpasses the act of vandalism. These panthers represent evil as such. They are ravenous animals, yet their dark colors and the way in which the surface is handled make them, in some way, captivating: evil has an alluring power, this is well-known. And it is this very alluring power that must be defeated.
At their feet, there is a classic Armenian rug, red as blood. The white superimposed decor expresses the hope for change.