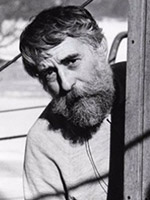 İlhan Koman entered the İstanbul Academy of Fine Arts in 1940; after studying painting for a year he transferred to the sculpture department and studied with Prof. Rudoph Belling. After his graduation he received a state scholarship and went to Paris in 1947 where he worked in l’Académie Julian and l’École du Louvre, and opened his first solo exhibition (1947-51). He produced his first iron works in İstanbul between 1951 and 1958 at the Academy’s sculpture department and workshop of which he was the co-founding instructor. In the same years he started the furniture company “Kare Metal” together with Şadi Çalık, Sadi Öziş, and Mazhar Süleymangil. In 1955 he joined André Bloc’s “Groupe Espace 1951” and declared the Turkish “Groupe Espace” together with Hadi Bara and Tarık Carım. In these years, he made the embossments in the east side of Anıtkabir, together with Zühtü Müritoğlu. In 1957 he was invited to the Brussels World Fair to represent Turkey. In 1958 he moved to Stockholm where he took a professorship at the Swedish School of Arts Crafts and Design, Konstfackskolan, and lived here until his death in 1986. In 1965 he bought the two-mast Baltic schooner and cargo ship M/S Hulda and made this 1905-made sailing ship into his home. M/S Hulda was to be his home and workshop until his death. His latest work mostly consists of project design to be actualized in largescale. Some of these projects are registered with the Swedish patent Office.

Koman had his first solo show in Paris in 1948, followed by numerous local and international group exhibitions around the world. He participated in the Venice Biennial in 1956, 1962 and 1976, the São Paolo Biennial in 1957, 5th Tehran Biennial in 1966, 2. International Contemporary Sculpture Exhibition at Musée Rodin in Paris in 1961 among many others. Koman also worked on various public art projects in Turkey and Sweden. He was also a writer and a researcher; and some of his innovations were patented during his lifetime. Koman passed away in Stockholm in 1986. In Turkish sculpture, he is well placed among those effective members who search for new dimensions and who abolish the traditional form of the former generation.

Koman, who examined closely various art movements since his years of studentship, also examined closely the contemporary art movement when he was in France and he adopted the geometric-abstract perception. He made expressionist-abstract works in the years of 1963-64. After 1965, a lyric-abstract expression was started to be seen in his works. He made experimental works on geometric shapes in the beginnings of the 1970s. In addition to completely geometric-abstract sculptures, he also realized a series of sculptures name Sonsuz that were the synthesis of figurative and geometric shapes. He created a dynamic installation with a spiral arrangement in these works. In 1980, he screwed the metal bars to each other and he created a series of monumental sculpture that recalled the antique Nike sculptures.

The Project of Koman winning the first place in the competition of square arrangement in Sundsvall in 1967 was implemented in 1971. In 1970, his work named Leonardo Anıtı was deemed worthy of one of the first price awards (together with the architect Çetin Kanra) in the competition of the sculpture to be put in front of the Municipality Building of Örebro. This work was bought by the Swedish government afterwards and was put in front of the Stockholm Architecture High School. In 1981, he won the Sedat Simavi Vakfı Görsel Sanatlar Ödülü (T.N. Visual Arts Award from the Sedat Simavi Foundation), together with the painter Yüksel Arslan. He participated in the expedition of the Grönningen Group in Denmark as a guest artist in 1986.

- Numbered, stamped and certificated by “The Foundation of İlhan Koman”
- This work is number one from an edition of nine plus one artist proof

The “Infinity Minus One” series are a set of derivative artworks following the element as a base for iterative (repetitive) shapes. Koman is inspired from the kite-tails he made in his childhood in Edirne.

By taking a single paper sheet and cutting it like the illustration below, we obtain a kind of garland multiplying the length of the original rectangle and permitting to create an amazing shape.

In derivative works of “Infinity Minus One”; such as “Infinite Pillar” or “Hyperforms”, motion becomes perpetual in the audience’s minds, while the form reaches towards infinity. Koman uses the wind and the force of nature as the material while creating his rotors.