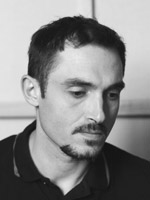 Gurgen Babayan was born in Yerevan, Armenia, in 1984. Between 2002-2008 he educated at The Yerevan State Academy of Fine Arts, Department of Painting. His first solo exhibition “The Realist” took place in Moscow Artists’ Union (Russia) in 2017.

A figurative artist, Gurgen Babayan is focusing on basic instincts and emotions of daily life, analyzing the interesting aspects in their creation and trying to find by means of visual forms the reflections of humanity’s self-essence. Believing this visual language to be self sufficient and not needing any further verbal explanation, the important thing for Babayan is the ingenuity in relaying this visual form. Although the artist is clearly influenced by classic arts, especially the painting traditions of Northern Renaissance, he strives to create a personal art style and a pictorial language of his own.

Babayan focuses on Christian mythology and their possible daily occurrences by creating a visual story in his works. Painted in a “primitively-naturalistic” manner and elaborated with rigor; the figures, gestures, dullish and static compositions which create the work itself are colored and illuminated in due form. These elaborated surfaces of paintings serve to create an air of mystery for the scene, while simultaneously invoking a feeling that “there is something from dreams in the atmosphere.”


Artist Statement:
As a painter of figurative art, it has always been far easier for me to create art than to talk about it.

Emotions of everyday life are the initial impulses for creating my compositions. I also receive inspiration from masterpieces of classical art, especially from the Northern Renaissance pictorial traditions. Although these influences are very important for me, the invention of my own artistic style and pictorial language is the main objective of my creative process.

Throughout life, each person is impacted by the surrounding world and its historical, cultural, spiritual and existential contexts. Yet, the artist tries to analyze these interesting aspects of existence and find the reflections of essence of a human being by means of visual forms. I strongly believe that this visual language is self-sufficient by itself and does not need any verbal interpretations. There is only one important thing – the craftsmanship of the interpretation of visual forms.

In the works below, I was concerned with the development of my visual language (artistic style), in order to fully express my attitude towards the themes of compositions. The viewer can evaluate if I have succeeded or not, since the artist's attitude to his own art is not always objective.

In the presented artworks: "Conflict", "Stigmata", and "Sanctuary," the theme of Christian mythology is in the center of my interests, manifested in everyday life. I represent my vision of ordinary life, observed through a “mystical prism” of Christianity. Stylistically, these compositions are painted in "primitively-naturalistic" manner. In the scrupulous, detailed compositions one can see references to the Medieval and Renaissance religious art tradition, as well as the influence of early 20th-century paintings – "new materiality", "Russian avant-garde", and "Dutch neoclassicism". In these paintings, one can see some figures in ridiculous “wooden” poses, gesticulations, frozen, and static compositions with formal coloring and light. The detailed surface of pictures makes all the scenes seem mystical. There is something from dreams in the atmosphere…