Night in The Mountains (Dağlarda Gece), 2013 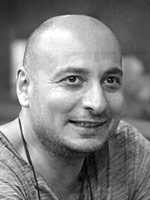 Sergey Narazyan was born in 1970, Yerevan, Armenia. His first education of fine arts was in a drawing studio in Union of Architects of Armenia. In the following years, Narazyan took lessons in painting, drawing and composition in the studio of the well-known Armenian artist, Ruben Gabriyelyan. In 1989 Narazyan entered the Graphic Arts branch belonging to the Representational Arts Department, State Academy of Fine Arts, Yerevan. His first solo exhibition took place in the exhibition hall of the Union of Architects of Armenia in 1994, where he immediately drew the attention of art critics with his crayon works.

In the year 1995, he got admitted to the Union of Artists of Armenia at the age of 24, thanks to his illustrations to the Russian author Boris Pasternak’s novel “Doctor Zhivagho” which also constituted his master’s thesis. Between the years 1995 and 1997, he reproduced every illustration in all pages and chapters of J. Swift’s renowned novel, “Gulliver’s Travels”. Blending amuzing and dramatic analogies with present-day life, Narazyan depicted iconic scenes such as the mass meeting on captured Gulliver’s body or the march of Lilliputian troops between Gulliver’s legs in recognizable reality, instead of Swift’s imaginary island. Subsequently, Narazyan put together a collection of his paintings named “Provincial Tragedies”, where he expressed his caustic, ironical and sometimes even wicked observations on provincial life with a sincere approach.

In 2001, Narazyan opened his third exhibition in Paris, with the personal assistance of the Academy of Arts of France member and UN Goodwill Ambassador Pierre Cardin, the renowned couturier. The exhibition consisted of 90 pieces; which included almost all of his principal works, as well as his other illustrations and paintings. Between 1999-2016 he took part in many group exhibitions in several countries such as USA, Germany, Switzerland, Russia, etc. His works are included in more than hundred personal collections.

In recent years, Narazyan has based most of his works on contrast. Generally transforming contrasting themes such as life and death, youth and agedness, power and weakness into ideas using different figures, the artist in one of his recent pieces renders a view from above of the troops of soldiers in a foggy atmosphere between high mountains, where the normally looming troops can be seen as tiny as ants, depicting their weakness in the face of inner fear and thus, the rapport between power and weakness.

From time to time, using static human figures he reiterates their postures that had become heavier under the weight of years with a view infused with the consciousness of experience. Not just confining the distortion of old age and collected memories to human beings, the artist, when painting overripe fruits - or as it can be seen in his painting “The Elders” which depicts two old wooden cottages in an unkempt landscape full of weeds – encourages the viewer to contemplate on the stages of existence.

The background also plays an important role in Narazyan’s paintings. Sometimes as a wrinkled fabric or wavy curls, and sometimes as the motifs of an Eastern rug and silky fabrics, the floor becomes prominent as an integral element to the story. These rug motifs with the theme of death are also painted as a symbol of the everlasting journey of human beings. Occasionally, the artist crosss these motifs with silk cloths to create different time sequences. In his artwork “The Red Lipstick”, Narazyan pictures a women stationed just on the junction point of these time sequences who, despite her physical appareance withered with old age, wears a red lipstick and a floral blouse, thus inviting us to reflect on the cycle of renewal.