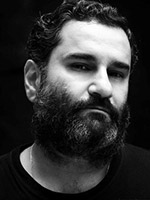 Awards:
1998 Diploma (Exhibition dedicated to the 10th anniversary of the victims of the earthquake in Spitak), Artists’ Union of Armenia, Yerevan


Review:
TIGRAN SAHAKYAN: CRE – ACTION
The transformations of the final years of Tigran Sahakyan's art serve as the subject matter for study of the Cre–Action project. The artist represents that generations of artists whose path towards maturation took place in an atmosphere of war, transformations of political systems, and economic and psycho-moral tremors.
In these conditions, the subjective "Self" of the artists is forced to smooth the road, by being an eyewitness of the "old" artist-type – on the odyssey of abandoning the art scene step by step. The prospects awaiting the artists and art creator are unclear. The open-ended and firm self-isolation adopted by the independent state created an equivalent to this process – a type of artist isolated from the viewer.
Tigran Sahakyan is one of those artists who is in no hurry at all to win over an audience. On the contrary, it seems that his art has turned its back on the viewer of today. This phenomenon, as the artist's attitude, is not new. It has numerous precedents. Nevertheless, with all its hues and causes, it is increasingly becoming rooted as a lifestyle in the context of Armenia. The domestic political initiative to expel contemporary art from having any application to life has resulted in the factual nominal existence of the artist. The Artist is living in a hyper-politicized society where the bourgeoisie, in its embryonic stage views art as an attribute that affirms personal happiness, whilst the non-established citizen sees art as a cry personal downfall or an expression of political revolt.
Absent from Tigran Sahakyan's art are the abovementioned references directed to the viewer. The ABCs of this art aren't made up of easily intelligible symbols and don't lead to a direct meaning. The art has multi-meanings and is indirect.
If we dare call the fundamental iconographic principle of the vast majority of the works in the exhibition as "abstract", then it will be interesting to follow the painter's first precedent of withdrawing from objective vocabulary. The "Red Rooster" marks the threshold of that new stage where the brushstroke depicting visible specificity gradually attempts to attain autonomy. Events taking place on the surface of the canvas acquire another process. A profoundly deep explosion occurs, paving the way towards a different Cre-Action.
The painting surface turns from the conversation around the object or space into a unique field, where the final image condenses in the final result of this process.
The traditional/classic "paint" and "brush" are removed from usage. The material is changed; metal, fabric and mortar are introduced. The intervention of the hand changes the entire content of creation. The materials being used emphasize their former raw material characteristics. This process gradually permeates both the surface and the painting's exterior and content structure.
The works are viewed as image-targets, where the dominant element fills the center of the painting. The color scale swings from rich and sharp hues to the monochrome. The texts in Latin, which appear to a lesser extent, are perceived more as images than ideas.
With its development of form and pictorial transformations, the art of Tigran Sahakyan has achieved a recognizable hallmark. These structures of color and form bring forth a definite aesthetic viewpoint that does not rest within the confines of simple formulas.
Nowadays, each modern artist serves as the hero and bearer of the myth he/she has created. It is possible to endow that modern epic with the assurance of the "real" – becoming the central character of the Cre-Action of the life that he/she lives.
The outline of Tigran Sahakyan's art is gradually taking shape; something which is borne out by the vitality it exudes.