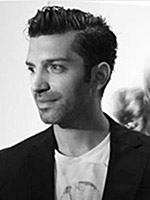 Tigran Tsitoghdzyan is a New York City-based visual artist. He was born in Yerevan, Armenia, in 1976. In 1986, by the age of ten, over hundred of Tigran's childhood paintings were chosen by Henrik Iguityan to be displayed in a solo exhibition in Armenia which thereafter traveled to the US, Russia, Japan and Spain...

Ten years later he migrated to Europe and then later in 2009 to the US. Since then and from New York, his new series, technic and images are experiencing a phenomenal uprise that comprises both art quality and a bold, intriguing, personal expression with a growing resonance on the international scene.

At present the majority of his works are in private collections, galleries and museums.

Some apparently casual references: Ingres, Ossian, Klopstock
The German Romantic poet and dramaturgist J. C. Friedrich von Schiller proposed that individuals, as well as societies, encounter three stages of transformation on the path to spiritual maturity. Tigran's evolutionary path is in this sense different to most artists, and one can speak of an absence of childhood in the general sense of the definition, as demonstrated both by his works of that time as by the events that marked its existence. This aesthetic maturation leads to a quick recognition of romantic painting trails in the work of these early stages.
In Zen and the Art of Motorcycle Maintenance, Robert Pirsig separates culture into two well differenced paradigms. The first one, the scientific, or "classical." That one is concerned with the material properties of objects. And the second one, the "romantic" or holistic, sees the overall gestalt, the relationships between all things and their aesthetic quality. Tigran works, as other 'New Old Masters' starts placing himself in the most balanced position. His creation summarizes both positions, reconciling the ideal of art.
For example, Untitled (1998), a painting from 1998, recalls in more than one sense of that romantic icon was the picture of Ingres, The dream of Ossian. The idealized humanity that surrounds the sitter's face reminds us the ossianic heroes that merge around the wandering bard, who relies on dreams, on his harp, to the spirits of the ancestors, which appear with a marble quality, addressing him as an inaudible heroism, windswept. One cannot help notice the dignity, not to say what Frederick Hartt calls "the utmost grandeur" of the figures.
Both positions are surreal, but the approach has in common not only formal, but spiritual meanings. The artist is in contact with the unconscious of a group that is represented in similar qualities of light, a distant, indifferent, snowy abstract idealization of the crowd. This is reminiscent of the verses of proto-Romanticism in Klopstock's most celebrated poetic work:

As yet unalarmed are the peaceable dwellers;
Close to his nightly-lamp the sage yet watches; and high friends
Over wine not unhallow'd, in shelter of odorous bowers,
Talk of the soul and of friendship, and weigh their immortal duration.

The Mirror Series, Crisis of communication: the impossibility of hiding our identity today
The body of work he chooses to showcase reflects his wish to bring to notice the deepest thoughts and impressions that have marked a timeframe between 90's, when he left his homeland Armenia, and the opening decade of this century. In a certain way, however, it is the reflection of the prevailing reality, mirroring transformations that followed and the ongoing changes in his homeland today.
The process started with the execution of the large mural piece titled Crowd Landscape, 700 x 140cm, painted on 45 separate canvases in oil. The space between the canvases creates a grid that splits a live size painted human landscape in order to turn it into a controlled composition. It recalls the dramatic days of Armenia's economic, political and social crisis of the early 90's. The work tries to reveal the existential dimensions of that reality and its consequences, but at large it is a visual dissertation on the suppression of individual liberty. It is also about Armenia's 20th century devastating historical experience, about sustaining the memory of the never forgotten genocide, about survival to move on to far-reaching changes.
Nonetheless, Tigran believes in holding strongly to his cultural heritage, but at the same time he wants to keep a record of intellectual and cultural achievements in the world in order to provide a dynamic development of society's different evolutional facets.
His recent series of Mirrors concentrates on the modern spirit of individuality in this era of 'selfies' culture. It compresses the ideas that have occupied him in connection with that vision of ourselves through interfering social networks and media. From that point of view, internet changed our need to be seen and the control we had about that image. The series of Mirrors, composed of large portraits (280 x 200 cm), are technically based on fusing transparent superposed layers of hands over the faces unhidden identity, about the impossibility of hide our identity today if we accept the ubiquitous power and rules of social media, with no filters capable to control the self difussion. Among other, the evolution of the series show us his latest work of that series, Mirror Metamorphosis, a painting where he adds more superposed layers that can reveal an altered, may be unstable state of the identity, opening a new angle of vision of the subject, with powerful subjective resonances.
Behind that is also his idea of 'time and the river', of Armenia with its centenary old traditions and history, its perspectives as how Tigran sees it through his multilayered vision of monumental portraiture.