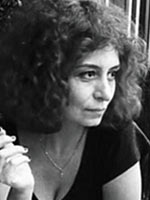 Annie Kurkdjian was born in Beirut, Lebanon, in 1972 and lives and works in Beirut, or “the orgy of Beirut”, as she prefers to call it, herself profoundly informed by the Lebanese Civil War and this theatrical stage of conflict and war. But unlike the painters of her generation, Kurkdjian is not searching for an escape into an idyllic site of solace and consolation, or obsessed with the literal representation of war. The horrors and trauma of war are translated in her work as warm intimate spaces of metaphor and embodiment: Transformations of the body, psychological horror, paralysis and deformity. Her paintings are conceived as academic studies on fear and psychosis: How to represent myself through different stages of mutilation, torture, and ultimately, the impossibility of redemption.

Her journey through the arts and humanities led her to concentrate full-time on art after 2009 and her paintings are thus construed as a reflection on the traumatic years of the war, the experience of womanhood, and the tragic absurdities of life. In her work, she translates the effervescent metaphors of Beirut, both cruel and beautiful, into transfigurations of the body, theatrical stages and shocking ironies.

As a painter, Kurkdjian has the capacity to articulate horror and humor in a direct and irreverent style, situated between absurd and cynical but effusive with the soft colors of genre painting, typical of her native Lebanon. Although her technique might be confused with merely figurative, her work is contemporary and surrealist, expressing the instability of life, diverse scenarios of inner emotional violence, deformities and psychological anomalies. In this world of contradiction, the artist is faced with her own traumatic personal story, while opening free spaces for creative manipulations, hopeless hope and redeeming situations.

The subjects in Kurkdjian’s paintings are not simply abject in unmediated horror, but also circumscribed by an absence of both subject and object, fixing their gaze onto an empty space of missing referents, whose source is unavailable to the observer. While there is a constant of despair, representation finds no finality in a work that is largely informed by philosophy, film and theology. The deformed bodies are not ultimately corrupted and abandoned to the biological cycles; there is also a search for mercy, love and dignity, through humorous references and laconic gestures. In the world of Annie Kurkdjian, there is a feeling of exposure and shame, of covetousness. The artist, a reader of both Rimbaud and Pasolini, wants to live with the illusion of living without illusions, and yet at the threshold of hope.

The obvious acridity of the paintings, through which she wants to write life and a life, is softened by genre earth colors, creating a formal ambiguity, not exclusively dwelling on tragedy. Her vital impetus towards the human condition is far more encompassing, often becoming comedy and caricature, allegory and cinema, hallucination and dream. Violence, in Kurkdjian’s work, does not only deform the victims, but also the victimizers and the physical space that contains horror. Surfaces become concave, legs stretch into arms and the eyes become fixed inwards, extending beyond the canvas, into unforeseeable places that are forbidding yet tempting and sensuous. The destination could be redemption, but might as well be loss and darkness. More than informed by conflict and anger, the instability of life is the constant source of inspiration in Kurkdjian’s work, whose precise eye does not look the other way when confronted with horror. Instead, she attempts to transform all this vital energy into a theater of life.

Reviews:
When we look at Annie's paintings, we are stricken by a humungous generosity of expression, but also by a lot of restraint. Her own story enlightens us: "At first, I was inspired by the drawings of psychotic individuals. During my psychology training, I watched schizophrenic people at work and was fascinated. Their sincerity renders their work utterly respectable. Folly is the wound of the soul, but it can open doors. Speaking of which, I am a devoted admirer of Gilles Deleuze". Obviously, this story reminds of that of the great painter Jean Rustin.
Annie's paintings have recurrent themes. One is stricken by the leitmotiv of the devouring, which could exist in a couple, but it also in the great ogress that is the maternal figure. Another theme would also be that of the self-devouring… or, in other paintings, one can see claws at work, referring to the pain we feel on a daily basis: the gravity of mutilations, like the breast's, or the preconceived diktats of the modern world that impose their standards and bad treatment. However, humor never ceases to exist in Annie's work. It emanates, for instance, from this painting that depicts a skewer of men with tiny genitals!
In fact, Annie's art addresses others. "Today", she admits, "I get my inspiration from everything sincere around me. For art to be a means of communication, probably the sole one, sincerity seems quintessential. Wounds let man know himself better, and this is precisely what interests me. I am very compassionate with those who suffer and I dedicate my work to them". This position contributes to the writing of a life. It is poetry in the etymological sense, which is the property of big artists only, painters, filmmakers and poets alike: "Poets and filmmakers obsess and inspire me much", she says. "In this perspective, I think of Alan Parker, Pasolini, or Agnès Varda. For the poets, it would be Artaud, Apollinaire, the Marquis de Sade. My relationship with Arthur Rimbaud is ancient and intimate. It's a veritable spiritual dialogue.
The series of paintings on devouring you were speaking about come as a reaction to the stanzas of the poem "Hunger" which obsessed me for so many years:

"Under the leaves a wolf is weeping
Beautiful feathers he was spitting
From its meal of gloom
Like him, I chose doom"

I also love to open this kind of dialogue in my works. I may speak of certain things through my paintings, but I know when to cease speaking so that others have their turn to do so".
For this Lebanese artist, it is also of expressing her ill being: "We are oriental in our genes but always seek to imitate the West. Result: queer hysterical phenomena where excessively made-up women wear piercings on their tongues, revealing their skin and accepting sodomy over long years so as not lose their virginity which, alone, lets them find a husband in the future".
Annie reflects her own country, standing on the frontier, living in a no man's land with fluctuating landmarks. Yet she clings to her exigencies as a woman and a painter: the profound sincerity of being oneself.